Solidworks vs Fusion 360: What's The Difference? 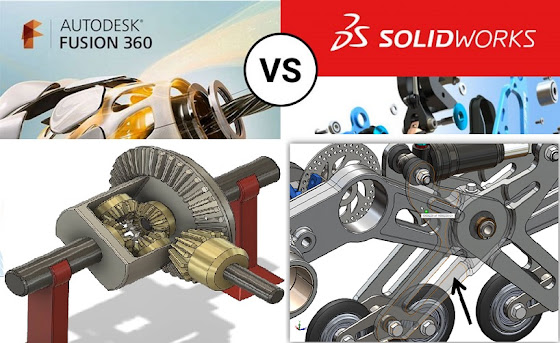 Fusion 360 is more than just software for making things. It’s an entire ecosystem for designers and makers that helps you focus on what matters most in your ideas. In This Post, We are going to learn about Solidworks vs Fusion 360 - What's The Difference?.

With an ever-expanding suite of tools, workflows, and resources, Fusion 360 has something for everyone from hobbyists to pros. If you’re just getting started with Fusion or are looking for a Refresher, this ultimate guide will get you up to speed in no time.

There are many different facets to CAD and 3D modeling programs, and it is a matter to know what tools you need, both Fusion 360 and Solidworks Software are great options for 3D Modeling.

Fusion 360 is an Integrated design and workflow software platform that can be used to design, analyze, and manufacture just about anything. It’s used in a wide range of industries from Product design to Architecture, Aerospace, and fashion. Fusion 360 has two primary functions: It can be used as an Engineering design tool that allows you to create virtual parts and Assemblies, as well as Generate 2D drawings from your data.

It can also be used as a manufacturing tool that allows you to track the progress of your products from start to finish. This is done through a centralized database that keeps track of everything from the date a part was created to the date it was shipped.

What is the Fusion 360 Student Version?

The Fusion 360 Student Version is a free version of the software that is available to educators and students. If you are not a student, you can still get a free version of Fusion 360 by using your LinkedIn profile to sign up. Educators can apply to Receive a free yearly subscription by filling out this short form.

The Student Version is identical to the paid version and can be used for personal and commercial projects. The only differences between the Student and paid versions are that you have a five-project cap per month and you can’t use the collaborative features.

You can Learn with a mouse and a keyboard is the same as any other CAD software. You’ll want to start by learning the basic interface of Fusion 360 as you design your first part. The best way to do this is to follow along with the tutorials in the software. The tutorials will give you a great understanding of how Fusion 360 works and will help you get started with designing the software.

When designing Fusion 360, there are a few things you need to keep in mind.

First, you’ll want to keep everything organized. By keeping your parts, sketches, and model tree organized, you’ll be able to find what you are looking for much more easily. You can use the tabs on the left side of the screen to organize your data.

Second, you’ll want to use sketch tools to create sketches for your data. A sketch is a 2D drawing that shows the relationship between one or more parts. Using sketches to create your data will help you create and modify your parts easily.

How to Learn Fusion 360 with a CAD Tablet?

CAD tablets are great for sketching out designs and creating parts. They are especially useful for creating sketches because the stylus gives you increased precision and control while sketching. When learning with a CAD tablet, you can follow the same workflow as when sketching with a mouse and keyboard.

The only difference is that you’ll use the stylus instead of a mouse. Once you’re done creating your sketches, you’ll want to convert them into parts. To do this, you can use the sketch to part functionality in Fusion 360. This will import the sketch data into a new part and allow you to modify it any way you want.

3D printing is a great way to prototype and create parts to be used in your designs. When 3D printing a part, you have several options as to how you want to create it. When starting a print, you’ll want to make sure that you have the correct settings for the material you are printing in Fusion 360.

You can do this by clicking the Settings tab in the design window and clicking the Materials button. From here, you can adjust the material settings for your print.

Fusion 360 is more than just software for making things. It’s an entire ecosystem for designers and makers that helps you focus on what matters most in your ideas. With an ever-expanding suite of tools, workflows, and resources, Fusion 360 has something for everyone from hobbyists to pros.

If you’re just getting started with Fusion or are looking for a refresher, this ultimate guide will get you up to speed in no time.